With all the chatter surrounding Christie Golden’s next novel, I have to admit I’d almost forgotten that World of Warcraft: Paragons was set to release today. It’s definitely not your usual sort of novel, instead holding a collection of short stories lore fans are likely already familiar with, all tucked into one book for easy referencing — but it also includes the long-awaited novella Blood of the Highborneby Micky Neilson. 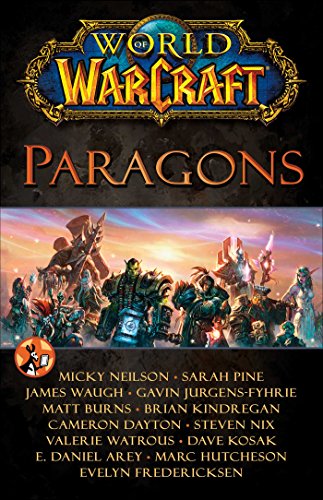 That said, fans looking for new, current lore aren’t going to find any in this particular collection. However, the book contains all of the leader short stories that were released over the fo of Cataclysm ‘s run, as well as a few other shorts — Unbrokenthe story of Farseer Nobundo, The War of the Shifting Sandsa piece that was released just before the launch of AQ40, and Road to Damnationthe story of Kel’thuzad, released just before the launch of the blod iteration of Naxxramas all the way highbornee in vanilla.

It’s Blood of the Highborne that really stands out among the collection, not necessarily because it’s better than the rest, but because it’s brand-new content that fills in a gap that’s been missing in lore — the conception and introduction of the Blood Knights of Silvermoon.

But that’s really just scratching the surface of what’s in Blood of the Highborne.

We’ve had the story of the Sunwell’s destruction for quite some time, but we’ve never heard it told from the viewpoint of the high elves that were there to witness its destruction.

We’ve been told of the magic addiction of the blood elves, but we’ve never really seen it presented as it is in highbornf novella, through the eyes of those that are suffering it.

And we heard of M’uru’s capture, of the techniques used to siphon the naaru’s energies, but we never really witnessed the moment he arrived in Silvermoon, or the rise of the woman who would be the first of the Blood Knights. Blood of the Highborne tells the tale of Lady Liadrin, as well as several other very familiar faces in blood elf lore, starting from before the days of the Troll Wars and continuing through Zul’jin’s capture, the arrival of the Scourge, the decimation of the Sunwell, and beyond.

It’s a haunting look at the fall of high elf civilization, and the desperate measures taken by the race to simply survive. It’s not just Liadrin’s story being told, here — Lor’themar Theron, Dar’khan, Rommath, Sylvanas, Kael’thas Sunstrider and many others make appearances throughout the story. While it’s not current content in terms of having anything to do with Mists of Pandariaor even Warlords of DraenorBlood of the Highborne is a bleak, beautifully written addition to the Warcraft library.

Fans of blood elf lore, or of the Third War in general should definitely give the book a read, because it elegantly clears up just about any and every question a lore fan could have about the events surrounding the attack on Silvermoon, the Sunwell’s destruction, the nature of the addiction that held the blood elves in thrall for so long, Dar’khan’s inexplicable survival of what was witnessed in the Sunwell Trilogy manga series, even the loss of Lor’themar’s eye.

To be perfectly honest, my only minor lament about the book release is that for now, it’s only available as an ebook.

Whether or not we’ll see a print publication of the book remains to be seen, but there’s a spot on my bookshelf that would love to have it.

It’s worth it just to have the leader short stories in one bound edition, but the addition of Blood of the Highborne glood Paragons a must have for any blood elf fan. Facebook is testing a ‘breaking news’ tag for developing stories.

Blizzard blocks ‘World of Warcraft’ and ‘Diablo 3’ in Crimea. From around the web.